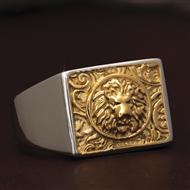 Inspired by one of the world's greatest mythological demi-gods... Hercules

A demi-god who wrestled death, Hercules is the most revered hero of antiquity –– a champion of the underdog endowed with staggering strength and stamina.

Renowned for his many adventures, our hero is best-known for the Twelve Labours of Hercules –– feats he completed under orders from King Eurystheus. The first of these deeds was to defeat the Nemean lion, a vicious beast that couldn't be killed with mortal weapons, as its golden fur was impervious to swords and its claws could cut through any armor.

Upon finding that arrows were useless, Hercules cornered the lion in a cave and strangled it to death with his immense strength. Hercules wore the lion's coat until the end of his days, protecting him from the elements and all but the most powerful of weapons. Zeus commemorated Hercules' feat by placing the lion in the sky with the constellation Leo.

Take hold of your own adventure with a ring forged of stainless steel featuring a visage of the Nemean lion finished in yellow gold. Don't surrender to life's challenges. Slay the lion standing in the way of your glory today!