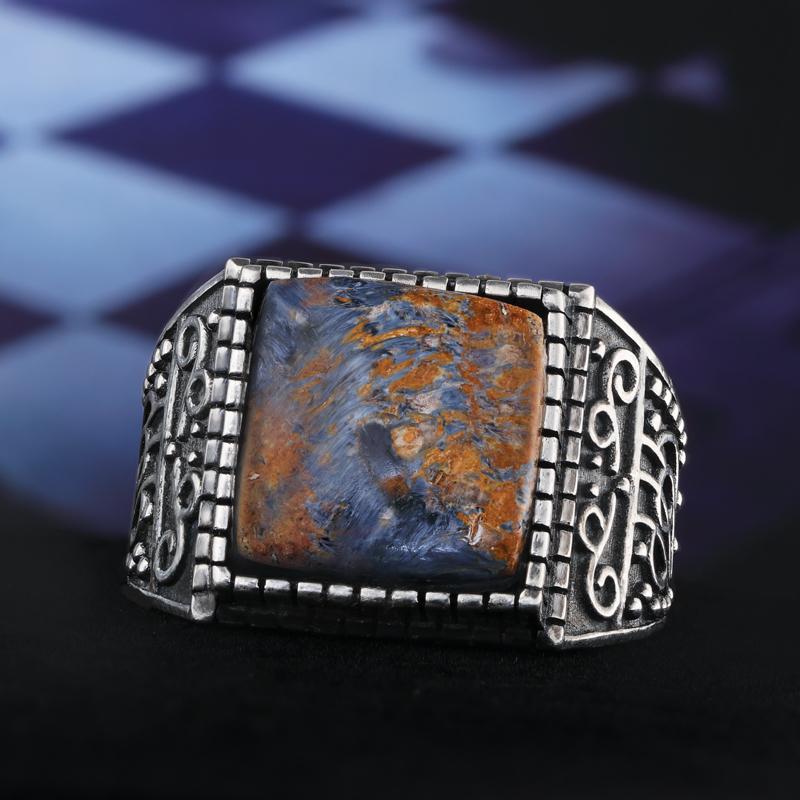 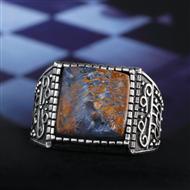 The stone Pietersite is extremely rare. There are just two known deposits on planet earth. This ultra rare stone possesses a dramatic, stormy swirl of colors. It is truly a remarkable stone that’s perfect for men who feel deeply but make their moves logically. The Chessman’s Ring features a single, large Pietersite stone, designed for men who know how to control the board.

The stone weighs six carats and has been expertly cut into the shape of a chess square, and set in an intricately-detailed 925 sterling silver ring with an antiqued finish. Pietersite’s rarity means some retailers are selling men’s Pietersite jewelry for around $1,000, but Stauer strategically acquired our supply way below what others are paying, so now we can make you king of the board for $99.

First let me say that Stauer Customer Service was outstanding in helping to resolve an issue with this beautiful ring. This ring was ordered along with another for Father’s Day. I requested overnight shipping but one ring was back ordered. I was told by email they would both be sent at the same time after the back ordered ring came in. I called and requested the Pietersite ring be sent immediately to arrive in time for Father’s Day. You graciously complied. . The ring arrived overnight and on time. Unfortunately the ring had a major chip along one side. I again called for return instructions and was told exactly what to do. A new ring was shipped priority mail and arrived one week after the first ring in time for my husband’s birthday. It is breathtaking & seems to shimmer in different light displaying shades of midnight blue, with streaks of sunset colored salmon and lighter shades of blue that seem to shift with movement like molten lava. It fit perfectly. He loves it. Thank you!

Received this beautiful ring on 6/24/19, in time for my husband's birthday. It is,without a doubt,one of the most beautiful stones I have ever seen. I would describe this stone as the color of indigo (midnight blue) with sunset colored veins streaking across the stone in hues of salmon colored orange and gold, offset by lighter bluish gray colors that seem to shimmer and move in different lighting and as you change the angle of the ring, much like slow moving lava. In looking up information on this stone, I believe the "shimmer" effect is actually known as chatoyancy. I also believe this particular stone, judging by the dark blue color, may be from the deposit in Namibia South Africa. Beautiful stone in a very nice ring setting. Couldn't ask for more. My husband loves it!

The ring itself is very attractive but I was disappointed that my stone was a solid blue color with none of the brown swirl pattern that was in the ring pictured in the ad. The blue does pair well with faded denim as that is the shade of it. 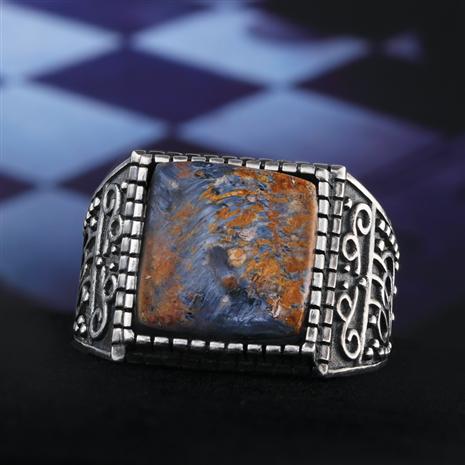